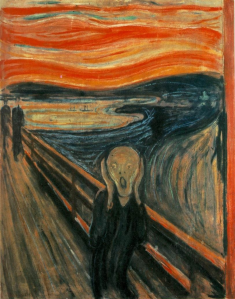 The Scream by Edvard Munch

Normally, I intend to publish posts a couple of times a week; however, as a new blogger, I am participating in Blogging 101. Consequently, for a short time there will be (or should be) daily posts. I apologize if they aren’t what you were looking for or expected. I just want to make sure I am doing the best job I can be doing. I plan to take the Writing 101 course at some point in the future so be forewarned!

I haven’t done today’s posted assignment yet and tomorrow’s challenge has already been posted. So… you are going to get a double whammy in this one.

So… Who am I? What will I be blogging about? And, why am I blogging instead of keeping a private journal?

I invite you to read my ‘About’ section as I spent a lot of time creating it and introducing myself to potential readers.  😉 Basically, I am a mom of college-age kids who, after 20 years of marriage, discovered (I wasn’t going to ever admit this on social media but I think I’m going to go for it and delete it after Blogging 101 is finished. My apologies to family and friends who may stumble across this. My only intent is to share my story, not trash someone else. ❤ Hope you understand!)

Anyway… in summer of 2012, after 20 years of marriage, I discovered my husband had an internet based addiction which included infidelity. I found out about his secret lifestyle when all of our money – checking, savings and investments – disappeared. See, he had been funding this lifestyle with hidden credit cards. He never made any payments on said cards. It went to court and he didn’t tell me. The judgement was to levy every bank account and investment (and to continue doing so) until his debt was paid off. I was devastated. I didn’t know all of the details at first and was committed to fixing it. The caveat was that I took over all finances, he saw a therapist, he went to a 12-step program, he not engage in addiction related behaviors and 100% honesty. If he slipped and chose an addiction related behavior and told me about it, I would consider it part of his recovery. If he chose a bad behavior and lied about it, I was finished. These were not intended to be ultimatums. They were simply the conditions under which I could walk with him through his recovery with the full knowledge that repairing our marriage could not happen until he was healthy and whole. He started out great. Unfortunately it only took a couple of months for him to become lackluster about his 12-step program and therapy. And, as details emerged, he was shown more and more to be dishonest and unfaithful.

To make a long story short, one day I caught him with my therapy journal in his hands. I asked him why he was reading my therapy journal and he denied even touching it – while it was in his hands. So, I called in sick to work, packed his bags, put them in the garage and called a locksmith to change the locks. I met him for coffee and explained he had 4 hours to get his stuff out of the garage. I could not be married to a man who I could not trust and who would lie to my face. He looked at me and said, “But I didn’t lie. You asked me why I was reading your journal. I told you I wasn’t and I wasn’t.” I reiterated that he had been holding it in his hands, covers open and his finger in the center of a page. He responded, “I was skimming it. That is a very different thing. If you wanted to know why I was skimming it you should have asked that.” I decided I was done playing games and that changing the locks was the right decision. If he could not be honest with me about something as innocuous as reading my journal, how in the world could I trust him in more serious matters?

Unfortunately, this happened right before my son’s senior year of high school. I did not want to make him move his senior year of high school so, even though I could not afford the house rental payments & utilities, I begged, borrowed and otherwise figured it out. My son graduated from high school in June. We moved out of our home in July. Of course, I am now quite broke so we couch hopped for a couple of weeks eventually ending up with my dad and stepmom until we could save enough for a security deposit for a new place. The only downfall is that this is an hour-and-a-half from my job if there is no traffic. There have been some days the commute has taken 3 hours. The good news is, we just got approved for an apartment closer to my job and only 8 minutes from my son’s. We move in November! I only have to make a terrible commute for about 6 more weeks!

Anyway, after raising kids and finding myself newly single (kind of. We have been separated for over a year but no papers have been filed.) and an empty-nester (kind of. My son still lives with and will be commuting to school. My daughter is living on campus.) I decided to do some soul-searching and figure out who I am. I am committed to turning this terribly negative and dark past couple of years into something filled with light and happiness and goodness.

I have participated in National Novel Writing Month aka NaNoWriMo for years and I do technical and public relations writing (websites, newsletters, press releases etc) as part of my job. I have always wanted to do more with my writing and clearly my physical journal was already breached. 😉  As such, I decided to go public. Inviting my friends and family to read this, however, is quite another thing.

So… for today’s challenge regarding my title and tagline…

I LOVE my title. It exactly reflects what I am trying to do – banish the darkness in my life through writing. My tagline is a Bruce Lee quote (which is funny since I am very un-athletic!) along with my confession that I am now aware of the darkness and, again, am looking for light.

I would love feedback, though. And, if you hate it or doesn’t think it fits, or if you think there is a better WordPress theme for me please let me know!